The time has come to hire a new employee. You have a couple of candidates to interview, and the pressure is on to find out which one has the right skills, mindset and experience.

But how are you supposed to determine all that from just an interview? It’s possible only if you ask the right questions.

To help you make a more informed hiring decision, we have come up with ten core competencies, and two interview questions for each, you want to inquire about the next time you’re interviewing an applicant. The competencies include:

Based on these ten core competencies, you should look to ask behavioral and situational interview questions. This is a good way to paint the picture of how the candidate behaved or would behave in different situations in the future.

Here are the 20 best interview questions to ask a job candidate.

1. What would make you happy in your next role?

Whenever you interview a candidate, you want to know what it is that they want. Chances are they left their previous job because of something specific. The reason for asking this question is to find out whether you can actually meet their expectations.

For example, if they go ahead and say “I want my own office space” and you can’t provide that, then maybe it’s not a good fit. Asking this question is a great way to prevent any misunderstandings from happening later on.

2. What are your career aspirations?

Instead of asking “Where do you see yourself in five years?” you should ask about the person’s overall career aspirations. You want to get a glimpse into the interviewee’s mindset. A good answer here would describe any specific goals, tasks that they would like to try or achieve. From there, you can decide whether this role would fit their long-term plans.

3. Tell me about the last time you received constructive feedback

With this question, you want to learn whether the person is open to feedback. A good answer here would describe a specific situation. What did they do after receiving constructive feedback? Did they reflect and learn from it?

If the interviewee can’t come up with a specific situation, perhaps it’s a sign they aren’t open to feedback, which could hinder their ability to learn.

4. Tell me about a time you made a mistake at work

This gives you insight into the candidate’s willingness to own their mistakes and learn from them. Did they reflect on the situation? Did they take any action to make sure the mistake doesn’t happen again? Mistakes happen to everyone. What matters is how the person reacts to them.

5. How do you know you are doing a good job in your role?

One of the best interview questions to ask is “How do you know you are doing a good job in your role?”; simply because it lets you know what is important to the candidate. How do they measure their work? Do they have specific measurements, or are they vague about it?

Asking this also lets you know how interested the person is about improving themselves.

6. Describe a challenging workplace situation. How did you deal with it?

A good answer here would adopt the STAR technique.

Task – What needed to be done?

Action – What steps did they take to solve the problem? What was their role?

Result – Did they reflect on the situation? Would they do anything differently the next time?

7. Tell me about a time you worked with a difficult person.

To candidates, this may seem like a question about the difficult person. That is not the case. A red flag here would be if the candidate actually starts talking too much about the other person.

What you want to know is if the candidate is capable of being tolerant and empathetic. You can ask follow-up questions such as “Why did you find the other person to be difficult?”

Also, find out how they handled the situation. Did they remain calm? In the workplace, you want your employees to be able to work through conflict.

8. Do you prefer to work as part of a team or independently?

A desirable answer here would depend on the job role. Is it a role that requires great interpersonal skills? Or is it something that doesn’t demand much collaboration?

This interview question is also relevant because of the rise in remote working. There’s a high chance in today’s climate that the candidate would at some point have to work by themselves. You want to know if they are fine with that.

9. If I’d ask your team members about you and your work, what would they say?

By asking this, you get a glimpse of the candidate’s self-awareness levels. Perhaps the interviewee can share some of their personality traits that they have been complimented on.

Or maybe the candidate has gotten negative feedback from peers. Have they taken the time to improve themselves?

This question also allows you to gauge if they would fit into your company culture.

10. Tell me about a group project you led

Instead of asking interview questions about their leadership style, get them to be specific. A good answer here would describe a situation where the interviewee took initiative. How did they motivate others to get involved? How did they spread out tasks between team members? Good leadership skills are a valuable trait in any role.

Having trouble hiring the right people? We can help you.

11. Tell me about the last time you gave constructive feedback

A behavioral interview question like this shows you if the potential employee is willing to take on responsibility. A good answer here would describe a situation in which the candidate didn’t like something, and made an effort to improve it. How did they communicate the feedback? In a team environment, being able to give constructive feedback to others is a valuable trait.

12. Can you describe a situation in which you were late to complete a task?

Asking behavioral interview questions like this helps you get to know the candidate. You can ask follow-up questions such as “Why were you late?” and see how they react. You want to learn whether they take responsibility.

In the end, see if they took any action to prevent the situation from happening again.

13. How would you handle being overwhelmed with your work?

This is a great way to find out how the candidate responds to stressful situations. Do they let the pressure degrade their work quality? Or are they rather motivated by stress to produce quality results?

If you know the job role involves stressful situations, this is a question you want to consider asking.

14. Tell me about a time you improved something in the workplace that wasn’t in your job tasks

Use this interview question to see if they are willing to go the extra mile to change something. In addition to their role, could they potentially provide value in other ways?

Asking this is a great way to see how committed the candidate is to the company they’re working at. You’ll also be able to understand if the person is able to see past their role.

15. Give me an example of a work-related goal you went after

This gives you an idea of how ambitious the interviewee is. Are they goal-driven? Do they even have goals?

A good answer here would describe a personal goal, rather than a group one. You want to see if the person is willing to go above and beyond to achieve something.

If they didn’t end up achieving their goal, it is by no means a bad sign. Meeting your goals is supposed to be difficult.

16. In a group setting, do you prefer to be the primary decision maker?

Desired answers here depend on the role you’re interviewing for. If the role requires a lot of independence, then you might want your candidate to be used to making decisions themselves.

If not. it’s important to inquire how much initiative the candidate takes. Do they usually wait to be told something? Being able to at least contribute to decisions is a good trait to have.

17. Tell me about a time you made an unpopular decision in the workplace

By asking this interview question, you learn how they manage situations where someone disagrees with them. What were the reasons they made the decision? Did they listen to others before deciding? Was the outcome negative or positive?

A good answer here would, again, adopt the STAR technique.

18. Imagine a situation where you are handling several conflicting tasks for different managers. How would you prioritize the tasks?

This interview question lets you know the candidate’s ability to prioritize their work. A good answer would walk you through the process. Which task would be completed first? Would they ask the managers about the importance of each task?

There’s no right answer here. You want to know whether the candidate has a clear idea of what to do in case a situation like this arises.

19. Would you rather be good and on time or perfect and late?

Oftentimes candidates go on to answer “perfect and on time.” But you want to push them to choose between being on time and perfection.

Unless the candidate has really good reasoning, the desired answer here would be “good and on time.”

The thing is, perfection doesn’t exist. If anything, perfection is an excuse. “I submitted my work late because I wanted it to be perfect.” How can work that’s turned in late be perfect in the first place?

If you are working with clients, even the best work that’s turned in late is not good enough.

20. Imagine you have a team member that wants additional responsibility, but you feel they do not have the skills to handle it. What would you do?

Use this situational question when interviewing a candidate for a managerial position. You want to know how they’d approach this situation. Would they decline the team member’s demand? If not, how might they help them develop the necessary skills?

Asking this interview question is a great way to get a glimpse of the job candidate’s management style. 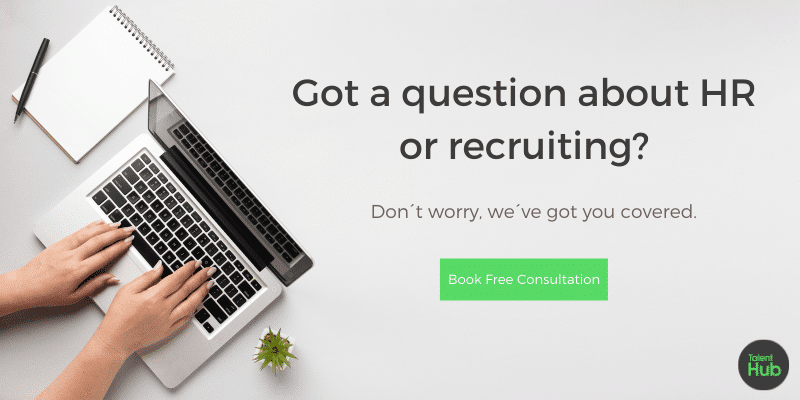 How to Write a Job Advert (The Complete Guide) (2022) | TalentHubNext
Subscribe to our newsletter!
Recent Posts
Categories
Language Switcher
Go to Top
We care about your data, and we'd use cookies only to improve your experience. By using this website, you accept our cookie policy.
Cookie settings Accept Reject
Manage consent